Prof. K. C. Patil (retired professor from IPC) and Dr. S. T. Aruna (NAL scientist and IPC Alumnus) have written an e-book with the above title. Some details may be found in the following linked documents: Part 1 and Part 2.

Feb 2020: Dr. K. Geetharani has been selected for the SERB Women Excellence Award. She will be shortly receiving this award from the Hon'ble President of India. Congratulations, Geetha!

Feb 2020: Prof. P. S. Mukherjee has been elected a Fellow of the Indian Academy of Sciences. He is among six faculty from IISc to receive the honour this year. Congratulation, Partha!

Jan 2020: Prof. G. Mugesh is an member of the Editorial Board of Chemistry — A European Journal. Congratulations, Mugesh!

Dec 2019: Prof. S. Sampath has been elected a Fellow of the The World Academy of Sciences. Congratulations, Sampath!

Nov 2019: Dr. K. Geetharani would be joining the Early Career Advisory Board of Chemistry — An Asian Journal starting from 2020. Congratulations, Geetha!

Nov 2019: Prof. G. Mugesh has received the 11th Infosys Award in Physical Sciences. The award recognizes "his seminal work in the chemical synthesis of small molecules and nanomaterials for biomedical applications." Congratulations, Mugesh! 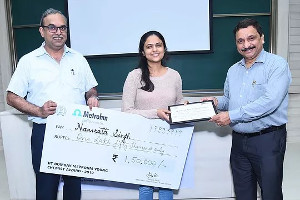 Sep 2019: Dr. Namrata Singh from the Mugesh group has been awarded the IIT Bombay Metrohm Young Chemist Award 2019 for Innovation in Research. The award was given for her research on uncovering the role of an antioxidant nanozyme that provides cytoprotection in Parkinson’s Disease model. Congratulations, Namrata!

Sep 2019: Dr. K. Geetharani is a recipient of the INSA Young Scientist Award and the NASI Young Scientist Platinum Jubilee Award for the year 2019. Congratulations, Geetha! 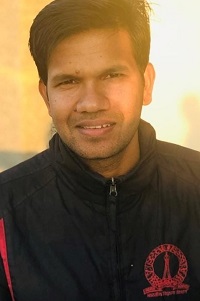 May 2019: Md. Kausar Raza from the ARC group has been selected to receive the SBIC Student Travel Grant to attend the International Conference on Inorganic Biological Chemistry 2019 (August 11-16), which will be held in Interlaken, Switzerland. Congratulations, Kausar! 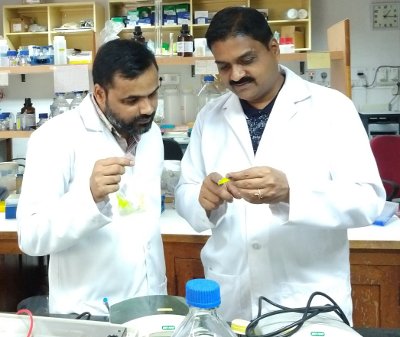 Apr 2019: Recent work carried out in Prof. Mugesh's lab on increased uptake of proteins by cells has been featured in The Hindu. Congratulations to the Mugesh group!

Apr 2019: A paper by Dr. Sanjoy Mukherjee and Prof. P. Thilagar has been featured in a Chemical News commentary by Derek Lowe. Kudos, Sanjoy and Thilagar! 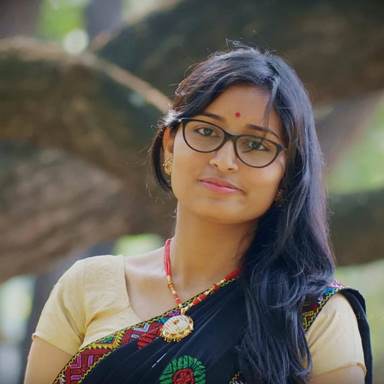 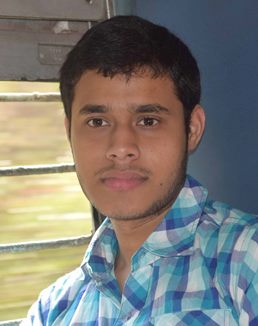 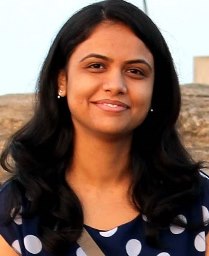 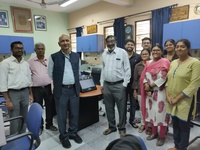 Jan 2019: Congratulations to the Umapathy group on the development of a spectrometer for rapid detection and identification of bacteria, called RAIDER-B. They have transferred the technology to DRDO, Bangalore.

Jan 2019: A new edition of Elixir, IPC's own magazine, is out! Click on the cover to get the pdf. Click here to access the previous editions. 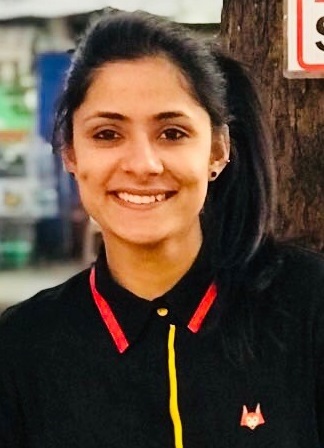 Dec 2018: Ms. Ritu Ghanghas (PhD student, Vasudevan group) has selected to be part of team India for the Asia-Oceanic Ultimate and Guts Championships to be held in Shangai, China, in July 2019. Congratulations, Ritu!

Dec 2018: Mr. Rameshnaidu Jenjeti (PhD student, Sampath group) has received the Karnataka DST Nanoscience Fellowship award for the year 2018. The award was instituted by the Department of Science and Technology, Govt. of Karnataka. Congratulations, Rameshnaidu! 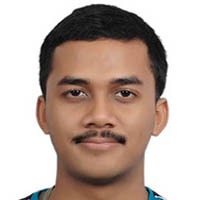 Jul 2018: Dr. K. Geetharani has been elected a Young Associate (2018-2021) by the Indian Academy of Sciences. Congratulations, Geetharani.

Jun 2018: Prof. E. Arunan has joined the International Advisory Board for the 1st International Conference on Non-Covalent Interactions, to be held in Lisbon, Portugal (1–6 Sep 2019).

Jan 2018: Congratulations to Ramesh Naidu Jenjeti from Prof. Sampath S group, he will attend and present his work on “Electrocatalytic Studies on Layered Metal Phosphochalcogenides” in the forthcoming Gordon Conference on Electrochemistry, Ventura,California, USA in January 2018. He has been awarded the GRC Carl Storm International Diversity Award to attend the Gordon Research Conference.

Dec 2017: Congratulations to Neena K. K. from Prof. Thilagar's Thilagar research group, whose work on "Diarylboryl-phenothiazine based multifunctional molecular siblings" has been featured in this article published by ATLAS of Science

Oct 2017: Congratulations to Gabriel O. Orodepo from Prof. Ramakrishnan S research group, who has been adjudged the best in poster presentation by research students (Chemistry Section) at the 24th National Conference on Liquid Crystals held at the Indian Institute of Science Education and Research, Mohali, from 11 - 13 October 2017.

Oct 2017: Prof. E. D. Jemmis has been elected as a member of the International Advisory Board of IMEBORON, a triennial international conference on Boron chemistry. Congratulations, Prof. Jemmis. 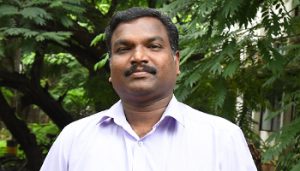 Oct 2017: Congratulations to Namrata Singh from Prof. Mugesh's lab, whose work has been featured in The Hindu. She is a member of the IISc team that fabricated nanomaterials to treat Parkinson's disease.

Sep 2017: Congratulations to Prof. Mugesh has been elected as the President of the Asian Chemical Editorial Society (ACES), an organisation of 13 major chemical societies in Asia-Pacific. Aug 2017: Congratulations to Mr.Prodip Howlader from psm lab, who has been awarded as a Best poster award in IUCr 2017 Hyderabad. 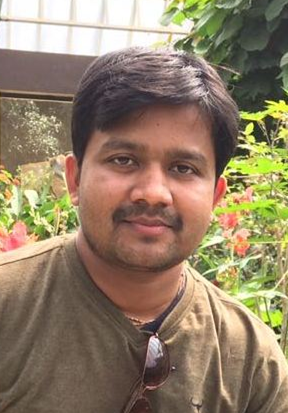 Jun 2017: Prof. Mugesh was featured in the article "Research needs to be multi-disciplinary, say scientists" in the Times of India.

Mar 2017: Prof. G. Mugesh has been awarded the National Prize for Research on Interfaces between Chemistry and Biology by the C.N.R. Rao Education Foundation and supported by the AVRA Laboratories Pvt Ltd. Congratulations, Prof. Mugesh.

Feb 2017: Prof. G. Mugesh has been selected for the Rajib Goyal Prize in Chemical Science by the Kurukshetra University. Congratulations, Prof. G. Mugesh.

Sep 2016: Prof. Partha Sarathi Mukherjee has been selected for the S. S. Bhatnagar Prize in Chemistry for the year 2016. Congratulations!

Jul 2016: Prof. P. Thilagar has been selected for the bronze medal (CRSI) of the Chemical Research Society of India.

Jun 2016: Prof. P. S. Mukherjee is now an Editorial Advisory Board Member of Inorganic Chemistry Frontiers, a journal published by the Royal Society of Chemistry (U.K.)

Jun 2016: Prof. Mugesh is now an Editorial Board member of Organic and Biomolecular Chemistry, an RSC journal. Congratulations!

May 2016: Recent research work on “white-light emissive molecular siblings” from Dr. Thilagar research group has been features in this article published by ATLAS of Science.

May 2016: Prof. Mugesh has been elected as the Vice-President of the Asian Chemical Editorial Society (ACES), an organization of 13 major chemical societies in the Asia-Pacific region. Congratulations, Prof. Mugesh!

Apr 2016: Prof. E. Arunan is now an Editor for the Journal of Molecular Structure. Congratulations!

Mar 2016:Recent cancer-related research by the group of Prof. A. R. Chakravarty on photodynamic therapy using Fe-based compounds has been features in this article published by The Hindu.

Mar 2016: Congratulations to Mr.Nandha Kishore M, Glass Blower of IPC, IISc. His demonstration of glass-blowing on the Open Day got featured in this article in the New Indian Express.

Jan 2016: Prof. E. D. Jemmis received the 2016 Fukui Medal, an award given by the Asia-Pacific Association of Theoretical and Computational Chemists ( APATCC).

Dec 2015: Emmanuel Etim, a PhD scholar in the Arunan group, has won the best poster prizeat the Challenges in Organic Materials and Supramolecular Chemistry (ISACS18) meeting in November 2015 in IISc, Bangalore. Congratulations, Emmanuel!

Dec 2015: Prof. G. Mugesh has been awarded the J. C. Bose National Fellowship 2015 by the Department of Science and Technology, Government of India. Congratulations, Prof. Mugesh.

Nov 2015: Prof. E. D. Jemmis has been invited to join the International Advisory Board of ChemPlusChem, a journal published by ChemPubSoc Europe and Wiley-VCH. Congratulations, Prof. Jemmis!

Oct 2015: Prof. E. Arunan has been elected as Fellow of the National Academy of Sciences of India. Congratulations, Prof. Arunan!

Sep 2015: Prof. P. S. Mukherjee has been invited to join the Editorial Advisory Board of Inorganic Chemistry, a journal published by the American Chemical Society. Congratulations, Prof. Mukherjee!

Aug 2015: Ms. Koushambi Mitra has been awarded the Bristol-Myers-Squibb Fellowship for the academic year 2015-2016. She is a PhD student of the IPC Dept. working with Prof. A. R. Chakravarty.Congratulations, Koushambi!

Aug 2015: Prof. S. Umapathy is now the Chairman of the IPC Department.

Aug 2015: Prof. P. S. Mukherjee has been selected for the bronze medal of the Chemical Research Society of India.

Apr 2015: Prof. G. Mugesh has featured in the list of Top 10 famous Indian Science Personalities of 2014 published by Scientific India.

Nov 2014: Prof. S. Sampath has been elected a fellow of the Indian National Science Academy.

Nov 2014: Prof. G. Mugesh has joined the Editorial Board of the Bioorganic Chemistry, an Elsevier journal.

Oct 2014: Prof. E. Arunan has joined the Editorial Board of the Journal of Molecular Spectroscopy, an Elsevier journal.

Sep 2014: Prof. S. Vasudevan has joined the Editorial Advisory Board of the Journal of Physical Chemistry A, an ACS journal.

Jun 2014: Profs. G. Mugesh and P. S. Mukherjee have joined the Editorial Board of Scientific Reports, a journal of the Nature Publishing Group.

May 2014: Prof. B. R. Jagirdar was awarded the A. V. Rama Rao Foundation Prize at JNCASR, Bangalore.

Feb 2014: Prof. E. Arunan has been elected a Fellow of the Royal Society of Chemistry, UK.

Jan 2014: Prof. H. Manohar, a former Professor of the IPC Dept., was honoured as a Senior Guru by the IISc Alumni Association. He was the first crystallographer to join a chemistry dept. in India.

Jan 2014:Prof. E. D. Jemmis is invited to be a member of the International Advisory Board of Chemistry: An Asian Journal.

Dec 2013: Prof. S. Umapathy takes charge as one of the Editors for the journal Spectrochimica Acta A: Molecular and Biomolecular Spectroscopy.

Dec 2013: Prof. B. R. Jagirdar has been awarded the R. D. Desai 80th birthday Commemoration Award for 2013 by the Indian Chemical Society.

Nov 2013: Prof. Puspendu K. Das takes over from Prof. Ashok G. Samuelson as the new chairman of the IPC department.

Prof. B. R. Jagirdar has been elected as a Fellow of the Indian Academy of Sciences

Prof. G. Mugesh has been elected as Fellow of the National Academy of Sciences, India.

Prof. G. Mugesh has been elected as Fellow of the Indian Academy of Sciences.