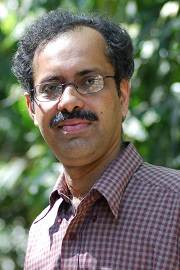 The main thrust of our research is to understand solid-liquid and solid-solid interfaces involving modified surfaces and new materials with special emphasis on electrochemistry.

There has been a spurt of activity in the area of 2D materials during the last several years. Since the advent of ‘graphene’ two dimensional, layered chalcogenides such as MoS2 have attracted attention as electrocatalysts for various redox reactions. Our interest has been in ternary chalcogenides and phosphochalcogenides such as MoSSe and PdPS for catalyzing oxygen reduction and oxygen evolution, chlorine evolution, carbon dioxide reduction in addition to hydrogen evolution from different electrolytes. Other layered materials based on exfoliated or expanded graphite (EG), ternary thiophosphates are also being looked at.

Transition metal nitrides and carbides such as titanium nitride (TiN), titanium carbide (TiC) and carbonitrides (TiCN) possess metallic conductivity, and are highly corrosion resistant. We have been interested in preparing nanostructures of various nitrides and carbides and explore their electrocatalytic properties.

Our objective is to prepare stable, compact and well oriented 2-dimensional and 3-dimensional thin films and characterize them for applications such as electrocatalysis, sensing and devices such as FETs. Interfacial reactions at air-water interface under applied surface pressure are being explored as well.

We explore bi-functional catalysts and use them in metal-air batteries such as zinc-air and lithium-air systems. One of the holy grails that we are pursuing is on magnesium based rechargeable batteries. Our recent interests include gel based electrolytes and solid-state batteries based on novel catalysts. Hybrid capacitors combining a battery electrode and a capacitor electrode have been another area of interest. We are pursuing work on Pb-C based as well as Li-C based hybrid capacitors.