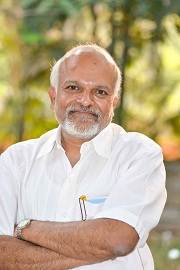 The efforts of my group can be broadly described under two categories – one is the development of new synthetic routes and the other is the study of molecularly designed polymeric materials with a focused property-evaluation and utilization strategy. In the context of the former, we have been engaged in the development of new methodologies for the preparation of hyperbranched polymers, such as polyurethanes, polyesters and, more recently, polyethers. The study of the evolution of the macroscopic behaviour in these hyperbranched structures, vis-à-vis, the Tg, Tm and crystallinity, was the focus of this investigation. The study of segmented polyethylene oxide and their branched analogues, prepared via a novel melt transetherification route recently developed in our laboratory, is being carried out with a view of developing solid polymer electrolytes based on these materials.

Molecular structural fine-tuning of polymers is motivated by the strong conviction that this can lead to a better understanding of the structure-property relationship and thereby lead to improved utilization of polymeric systems in existing as well as novel applications. In the area of conjugated polymers, we have shown that by tuning the average molecular conjugation length, several properties, such as their luminescence colour and efficiency, chain conformation and solvent/temperature-induced conformational transitions, can be beneficially modulated. With the objective of developing nano-structured polymeric materials, we have developed various types of surfactants, in which the polymerization of the counter-ion serves to freeze-in the rich variety of aggregate morphologies, such as micelles, vesicles and gel phases.

Entropy drives macromolecules to adopt a random coil conformation in solution – the motivation to overcome this and generate spatially well-organized macromolecular entities by directed folding, stems from the desire to emulate the elegance of nature on the one hand, while at the same time from the expectation that this will enable one to bridge the gap between the molecular scale and the macroscopic one, in terms of the evolution of structural order. We are engaged in utilizing a range of weak intra-chain inter-segment interactions, such as p-stacking, donor-acceptor charge transfer and solvophobic effects in specifically designed macromolecules, to achieve this objective. In parallel, collaborative efforts are in progress to develop newer methods, such as the utilization hyper-Rayleigh scattering, for probing conformational properties of macromolecules and aggregates. Apart from these, we are also engaged in a few other areas, such as molecular and metal-ion imprinted polymers and surface-functionalized colloidal dispersions.