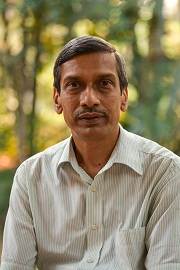 The central objective of our group is to use single and two laser based spectroscopic techniques to probe molecular properties. In the area of molecular nonlinear optics our aim is to exploit second harmonic generation (SHG) as a probe for bulk physical properties of molecules in solution. Intensity of SHG is proportional to the molecular hyperpolarizability (b ) which changes with a physical process as well as symmetry of the molecular specie in solution. Using this principle we measure second harmonic light scattering intensity and relate it to the property which is responsible for causing the change. Chemical application of second harmonic light scattering is a very active area in our group. Polarization resolved second harmonic scattering has been used to obtain geometry of weak (1-10 kcal/mol) molecular complexes in solution for which no technique other than small angle neutron scattering is available. The origin of large second harmonic generation in noble metal nanoparticle of 5-100 nm diameter is another area of investigation where we have probed the origin of nonlinearity in these systems.

In the area of atmospheric and environmental chemistry our research efforts are currently directed to detection of polycyclic aromatic hydrocarbons and their photolysis products at low concentrations by FTIR spectroscopy. In the high frequency mid-IR region we are now trying to develop an effective spectroscopic Hamiltonian to identify vibrational peaks resulting from Fermi Type I and Type II coupling mechanisms. It is also found that heteroatom substitution in a organic ring enhances the Fermi coupling constants. We are also working on quantification of reactive oxygen species generation from photo-excited PAHs and related organic aromatic pollutants which will help us understand the type and identity of radicals that are formed by action of solar radiation on such pollutants.

In the area of biophysical chemistry/chemical biology we are investigating protein-nanoparticle interaction and trying to find an effective use of nanoparticles in preventing protein aggregation at the subnanomolar regime without affecting their functions.