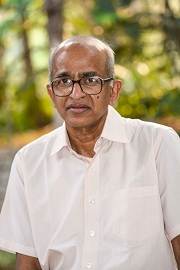 Can one design molecules that prefers to diffuse on a surface by rolling?  The question is of interest and importance in connection with nano-technology, where the dream is to design nano-motors that make use of chemical energy or nano-robots that can go inside a cell and perform useful work.  We have explored the possibility of having a molecule chemically bonded to the surface, and capable of moving on the surface by rolling, because of its fluxional nature. Thus, our theoretical studies predict hypostrophene, adsorbed on Al(100) would diffuse on the surface by rolling, rather than sliding – it is a molecular roller. We have studied cyclopentadienyl adsorbed on Ge and shown that it acts as a molecular wheel.

We have also investigated the dynamics of a mechanical two-level system (mechanical equivalent of the ‘bit’). The compression of a nano-rod or a rod like molecule would cause it to buckle. There are now two possible states, and the system is interesting, as a potential nano-sized device. We have developed a theoretical approach for the calculation of the rate of transitions between the two states, due to thermal fluctuations and tunnelling. Another interesting suggestion from our group is the umbrella inversion in a molecular rattle.  The molecule cyclononatetraenyl lithium (see figure) has a pyramidal geometry.  Our calculations show that it can undergo umbrella like inversions in which the lithium goes through the ring to the other side.  The barrier height was found to be about 12 kcal/mol. Appropriate vibrational excitation would allow the Li to go from one side of the ring to the other (see figure).

How do long chain molecules cross a free energy barrier in space? The question is of interest in problems involving the passage of a long chain molecule through a pore in a membrane. We found that they can do this, rather efficiently, through a kink mechanism. Other related problems that we have studied are

In addition to the above, we have been interested in other theoretical problems and these will only be mentioned here. They are