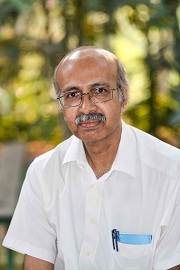 Research in our group encompasses different areas of condensed matter theory, including the statistical mechanics of complex fluids, polymer physics and stochastic processes. Over the last few years, we have been especially interested in developing theoretical models of the dynamics and reactivity of biological macromolecules, with a view to understanding cellular events at the molecular level. Among the problems that we have been pursuing are the following

The ability to confine single molecules of DNA or protein to nano-sized domains, and to make measurements of their properties under these conditions, is one of the many recent technological developments that has made it possible to explore different aspects of cell biophysics in vitro. In this context, we have been trying to understand confinement effects on polymer dynamics in rigorous statistical mechanical terms, without appeal to phenomenological models. These efforts are moving along some of the following lines of research:

These various approaches to confined polymer dynamics are currently being extended in different directions.

Thermodynamics at the scale of single molecules is characterized by a marked sensitivity of its measurable properties to the effects of fluctuations. As a result, measurements of thermodynamic quantities in different samples prepared under nominally identical conditions do not always yield the same value. However, on the basis of very general principles of non-equilibrium statistical mechanics, it is believed that the distributions of these values (for selected stochastic variables) must satisfy certain mathematical constraints that are now referred to as fluctuation theorems. These theorems have been widely applied to the interpretation of thermodynamic measurements on single molecules, and research in the area of small system thermodynamics is proving to be fertile ground for generating new and interesting mathematical connections between theory and experiment. In this context, we have been using path integrals to explore the nature of the distributions that govern the fluctuations of different single-molecule systems, including the work fluctuations of an elastic dumbbell in planar elongational flow, the force fluctuations of an oscillator model of polymer stretching at constant velocity, and heat fluctuations in harmonically trapped Brownian oscillators, Brownian oscillators in magnetic fields, and coupled Brownian oscillators in dual temperature heat baths.