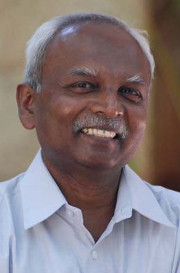 Our research is primarily in the area of Structure-Reactivity, and Structure-Property relationships in Coordination and Organometallic chemistry. Specifically, we would like to develop asymmetric catalysts. Our emphasis is on the design of complexes with potential for weak interactions. We are developing specialized phosphinites and phosphines which can have specific interactions with the substrate/reagents. Our design is based on the fact that asymmetric catalysis requires only a difference of few kilocalories between the diasteromeric transition states for effective asymmetric catalysis. This could be easily provided by hydrogen bonding and other weak interactions.

Asymmetric Catalysis has emerged as one of the greatest challenges in chemical synthesis. While it is generally possible to make and break various bonds with ease, it is not always possible to do this in an asymmetric fashion. The transition states leading to the formation of two enantiomers are usually diasteroisomers. To achieve a enantiomeric excess (e.e) of 99 % for a reaction run at room temperature, the difference in energy between the two transition states has to be about 3 Kcals /mol. In most instances, "steric effects" have been used to tilt the balance in favor of one transition state over the other. Less explored have been the uses of hydrogen bonding and hemilabile ligands. We are developing specialized ligands which can have predictable interactions with the substrate / reagents via weak interactions such as hydrogen bond donors or acceptors, C-H—π interactions to tilt the reaction in favor of one enantiomer.

Another area, which has caught our attention, is the area of medicinal organometallic and coordination chemistry. Our interests in this area are fuelled by the need to develop cytotoxic agents to target the cancer tissue specifically. We are currently trying to deliver smart-linked copper bisthiosemicarbazones to cancer tissue using macromolecules such as gold nano particles or PAMAM dendrimers. At the moment, our targeting has been tested in vivo on a mouse model. Biotin coated gold particles are ideal for delivering the copper complexes to tumor induced by HeLa cells.

The half-sandwich organometallic complexes we are making for catalysis are sometimes anticancer active! These piano stool complexes are apparently capable of taking a piggyback ride on transferrin to cancer cells, which have transferrin receptors over expressed on them! So they are in a sense – naturally targeted!